WHO gave D.A.R.P.A. the TREASONOUS authority to create the CORONAVIRUS?

Watch the progress of the southern border wall, closing America to foreign invaders. After this project, we’ll need to build on the Canadian border. Great infrastructure project to bring lots of jobs and tax revenue to the northern border states.

Secretary of Education Betsy deVos is a Pilgrims Society Globalist

Trump made a huge 4D move with the re-nomination of Ratliffe to DNI, a huge reformer. If the Senate doesn’t confirm him now, they get Grenell, who they hate more. If Ratliffe is confirmed, Grenell is freed up for Director of FBI… and since he’s already been through a Senate confirmation, he doesn’t need to be reconfirmed to become FBI Director.

Are you paying attention to George Soros, his sponsored NGOs, and the continuing Purple Revolution?

“A coalition of progressive groups, many funded by billionaire George Soros, is sponsoring a “People’s Bailout” community organizing outfit nudging Congress to use the next stimulus package during the coronavirus crisis to enact reforms that would fundamentally transform American society by achieving longtime progressive aims.” Learn more.

Here comes the American version of China’s Dragonfly. It is sneaking in as a special app to use for your “health and safety”. Make sure your network of listeners know that this is a way to “nudge” you into full blown Chinese-style social credit scoring.

Can you imagine your telephone company interrupting your conversations to censor your cursing? That’s the difference between a public utility for communication and a private platform pretending to be a public place for dialogue.

Knock, Knock. We’re From The Government & We Want Your Family’s Blood

The Vortex — Punching Back

Both AIM Patriot Tim and Rachel send us the video link below and ask for our opinion. Also look at Mark’s post below about Judy Mikovits. He has an ‘inquiring mind’ that has some unresolved questions about Mikovits.

[URGENT] I will DELETE this video within 24 hours. Dr. Rashid Buttar. The video was deleted once we busted it as being a piece of propaganda. If anyone drops in and has a copy, please leave the url in a single line in the comment box

First red flag is that it is posted on Video Advice which is a propaganda/ disinformation video site. Next, the video is professionally made – lots of flashy lights, nice graphics, etc. Not your basic citizen-raw production.  Someone put some time, effort, and money creating the message. They want the video piece to go viral.

It is a slick piece that deflects the origin of coronavirus. The Rothschilds and Pilgrims Society do not want you to look at the QUEEN’s controlling interest in the company Pirbright so the video distracts you from this and only takes you to a connection between Pirbright and the Gates Foundation.

Looks like Queen Lizard is throwing Bill and Melinda under the bus to save her sorry ass!

Also notice how you are tricked into thinking that Dr. Buttar is actually delivering the bulk of the message. He is not. He speaks at the beginning and then his voice is blended into the low, husky voice that narrates a good portion of the video. The video closes with Buttar speaking. A listener who isn’t paying attention will think that Buttar gave the entire message.

They want you to think that Pirbright operation settles at the feet of Bill Gates. Rubbish. The Queen is naked…and we are getting ready to show you with our upcoming blockbuster research who is hiding behind her skirts.

Some homework for those of you who have joined the AIM School of Truth recently, and a good refresher for those who have been in the trenches with us for awhile:

The British Origins Of The Coronavirus Further Confirmed

SCOTUS John Roberts is not Loyal to America

Several team members have sent us this video. Very disturbing. We ask that our advanced AIM patriot warriors who are in positions to look into this, will. Shad Sullivan Regional Director R-Calf USA

Lawsuits are pointless. Look at Judicial Watch’s suit against Newsom today. They won, but lost.

Judicial Watch: Court Agrees that Newsom Plan to Give Tax Dollars to Illegal Aliens Likely Illegal But Allows it to Proceed

Airbnb To Lay Off 1,900 Employees As Tourism Industry Collapses

AIM chalkboard artist Mark sends us these pictures below with a note: Is Judy Mikovits false opposition?? She should be at White House with Fauci and POTUS, in a real genuine world.

Not So Deep Thoughts, too

The Reappearance of Christ

We have now reached the moment in time when the etheric Christ enters into the life of the earth and will become visible, at first to a small number of people, through a natural clairvoyance. Then in the course of the next 3,000 years, He will become visible to greater and greater numbers of people. This will inevitably come to pass; it is an event of nature. That it will come to pass is as true as were the achievements of electricity in the nineteenth century. A certain number of individuals will see the etheric Christ and will themselves experience the event that took place at Damascus. 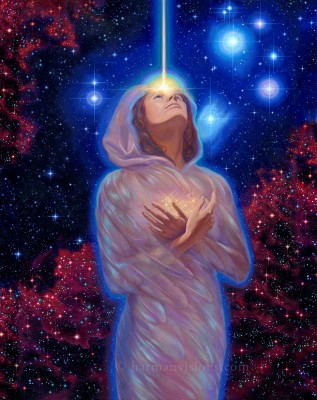 This will depend, however, upon such human beings learning to observe the moment when Christ draws near to them. In only a few decades from now it will happen, particularly to those who are young in years — already preparation is being made for this — that some person here or there has certain experiences. If only he has truly sharpened his vision through engaging himself with anthroposophy, he may become aware that suddenly someone has come near to help him, to make him alert to this or that. The truth is that Christ has come to him, although he believes that what he sees is a physical man. He will come to realize, however, that this is a super-sensible being, because it immediately vanishes.

Many a human being will have this experience when sitting silently in his room, heavy-hearted and oppressed, not knowing which way to turn. The door will open, and the etheric Christ will appear and speak words of consolation to him. The Christ will become a living comforter to men. However strange it may as yet seem, it is true nevertheless that many a time when people, even in considerable numbers, are sitting together not knowing what to do and waiting, they will see the etheric Christ. He Himself will be there, will confer with them, will cast His word into such gatherings. We are now approaching these times, and the positive, constructive element now described will take hold of the evolution of humanity.

Source: Rudolf Steiner – GA 130 – The Reappearance of Christ in the Etheric: IX: The Etherization of the Blood – Basel, 1st October 1911

To those of you new to AIM School of Truth, Conclave notes are from our team of citizen researchers who are leaps and bounds better at providing TRUTH and HONESTY than 17 U.S. Intelligence Agencies – COMBINED.

Shi Zhengli is a Chinese virologist who researches SARS-like coronaviruses of bat origin. Shi directs the Center for Emerging Infectious Diseases at the Wuhan Institute of Virology (WIV), a biosafety level 4 (BSL-4) laboratory located in Jiangxia District, Wuhan China. In 2005, Shi Zhengli and colleagues found that bats are the natural reservoir of SARS-like coronaviruses. In 2014, Shi Zhengli collaborated on gain-of-function experiments led by Ralph S. Baric of the University of North Carolina, which showed that two critical mutations that the MERS coronavirus possesses allow it to bind to the human ACE2 receptor. In 2014, the US National Institutes of Health placed a moratorium on SARS, MERS, and influenza gain-of-function studies, due to concerns about the risks vs. benefits of such research, lifting this moratorium in 2017 after the creation of a new regulatory framework.

According to Shi Zhengli and her colleague Cui Jie, no single bat in the wild harbors the exact strain of virus that caused the 2002-2004 SARS outbreak or the COVID-19 virus. SARS-CoV-2 (COVID-19) is in the same family as SARS, and it has 96.2% genome overlap with the most closely related known coronavirus. In February 2020, her team published a paper in Cell Research showing that remdesivir and chloroquine inhibited the virus in vitro and applied for a patent for the drug in China on behalf of the WIV.

New SARS-like virus can jump directly from bats to humans, no treatment available

Researchers from the University of North Carolina at Chapel Hill have discovered a new bat SARS-like virus that can jump directly from its bat hosts to humans without mutation. The discovery, reported in the November 9 issue of Nature Medicine, is notable not only because there is no treatment for this newly discovered [created] virus, but also because it highlights an ongoing debate over the government’s decision to suspend all “gain-of-function” [bioweapon] experiments.

Ralph Baric, chief researcher, tells us: “So this is not a situation of – if there will be an outbreak of one of these coronaviruses – but rather, when and how prepared will we be to address it. SARS first jumped from animals to humans in 2002-2003 and caused a worldwide outbreak, resulting in 8,000 cases, including one case in Chapel Hill.” [bio-lab worker]

Baric and his team demonstrated that the newly-identified SARS-like virus, labeled SHC014-CoV and found in the Chinese horseshoe bat, can jump between bats and humans by showing that the virus can latch onto and use the same human and bat receptor for entry [placed in the DNA of the man-made virus].

Translation: Dr. Baric created a new retro-virus which was released in China as another experiment to enhance bioweapon viruses.