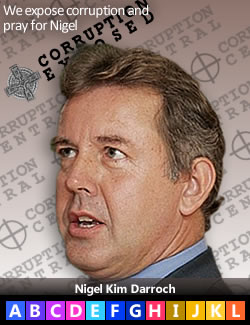 Hooked by the Privy Council

Head mounted on the wall of the Privy Council

https://www.thisismoney.co.uk/wires/pa/article-7221115/Sir-Kim-Darroch-A-profile-UK-s-man-Washington.html (In his first interview after the controversy, Sir Kim hailed Mr Trump’s “historic and impressive” election victory and called the so-called special relationship between the US and the UK “stronger than ever”… “But in an interview with the Financial Times last year, the diplomat gave the president a more ringing endorsement, saying: “I have met him seven or eight times and always found him to be absolutely charming.”)

(After finishing his A-levels, he studied zoology at Durham University because – in his own words – he was ‘naturally lazy’ and it was an ‘easier option’.

He joined the Foreign Office in 1977 after graduating because ‘they were the first people to offer me a job’ and started his ascent through the ranks at Embassies around the world, including top roles dealing with EU bureaucrats in Brussels.”)

Tied to Lord Mark-Malloch Brown, and therefore to George Soros and Mitt Romney

22 February 2008: The Minister of State, Foreign and Commonwealth Office (Lord Malloch-Brown): My honourable friend the Minister for Europe (Jim Murphy) has made the following Written Ministerial Statement. My right honourable friend the Foreign Secretary (David Miliband) and Kim Darroch (UK Permanent Representative to the EU) represented the UK at the General Affairs and External Relations Council (GAERC) in Brussels