Comey-Iran-China – All Roads Lead to London

Forget the Russians: It’s the Federal Reserve Seeking to Meddle in Our Elections

I was watching your story (The Evil Empire) and you mentioned Michael Horowitz.  He has attended at least one Bilderberg meeting since 2016  here is a link to almost all Bilderberg participant list for yearly meetings 2006 through 2010 are disturbingly missing though! Look at each list from 2011 through 2019…the amount of high level government Officials and Former Government Officials is troubling to say the least and The Director General of N A.T.O. and  the Director of StratCom In  N.A.T.O….. Senators, governors, mayors and the big tech C.E O.’S It’s a who’s who of high level government Officials…and of course major news C E.O.’S reporters and editor’s again look through the list. From 2011 through 2019 I believe in 2005 you even see John Bolton! I know Tom Cotton and Senator Lindsey Graham are listed as well as Elizabeth Warren. Here is the link to the lists I think you will find interesting things!!! Anyways it goes back to the Mid 50’s.

Facebook Rolls Out Facial Recognition to All Users Despite Lawsuit

The Curse of Led Zeppelin

To our younger audience, this is why Boomers care about a post on Led Zepplin. Whole Lotta Love

You misinterpreted my blacklist as a blacklist

New British IMPERIALISM based on the guidance of five members of the Pilgrims Society:

Hey, AIM community in the UK and/or British history buffs, we could use some help identifying these Brits and making sure our assumptions are accurate.

AFI researchers have uncovered two different photos of the Imperial Press Conference Luncheon Party at the House of Commons, June 7th, 1909. The four identified on the National Portrait Gallery photo seem to be a good key for sorting out the Parliamentary names, which appear to be not properly labeled. For instance, the person in the front row on the National Portrait Gallery version is evidently an Indian gentleman, probably Surendraneth Banjee, but he is identified in the Parliamentary Archive BACK, but clearly his chair is empty in that photo.

Fortunately, the Parliamentary Archives version is of such high quality that a correct identification of each person is possible by comparing it to other photos of them on the web. Each of these men was a prominent person and likely picture many times in searchers.

CONCLUSION: Likely the same person? The Parliamentary Archives label for the start of the back row appears correct.

From the National Portrait Gallery: 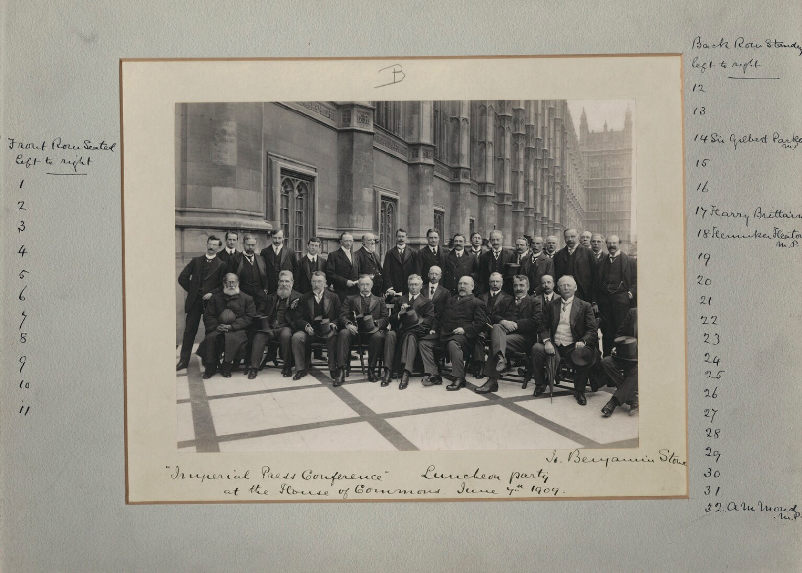 From the Parliamentary Archives:

FRONT (with top hats ON): 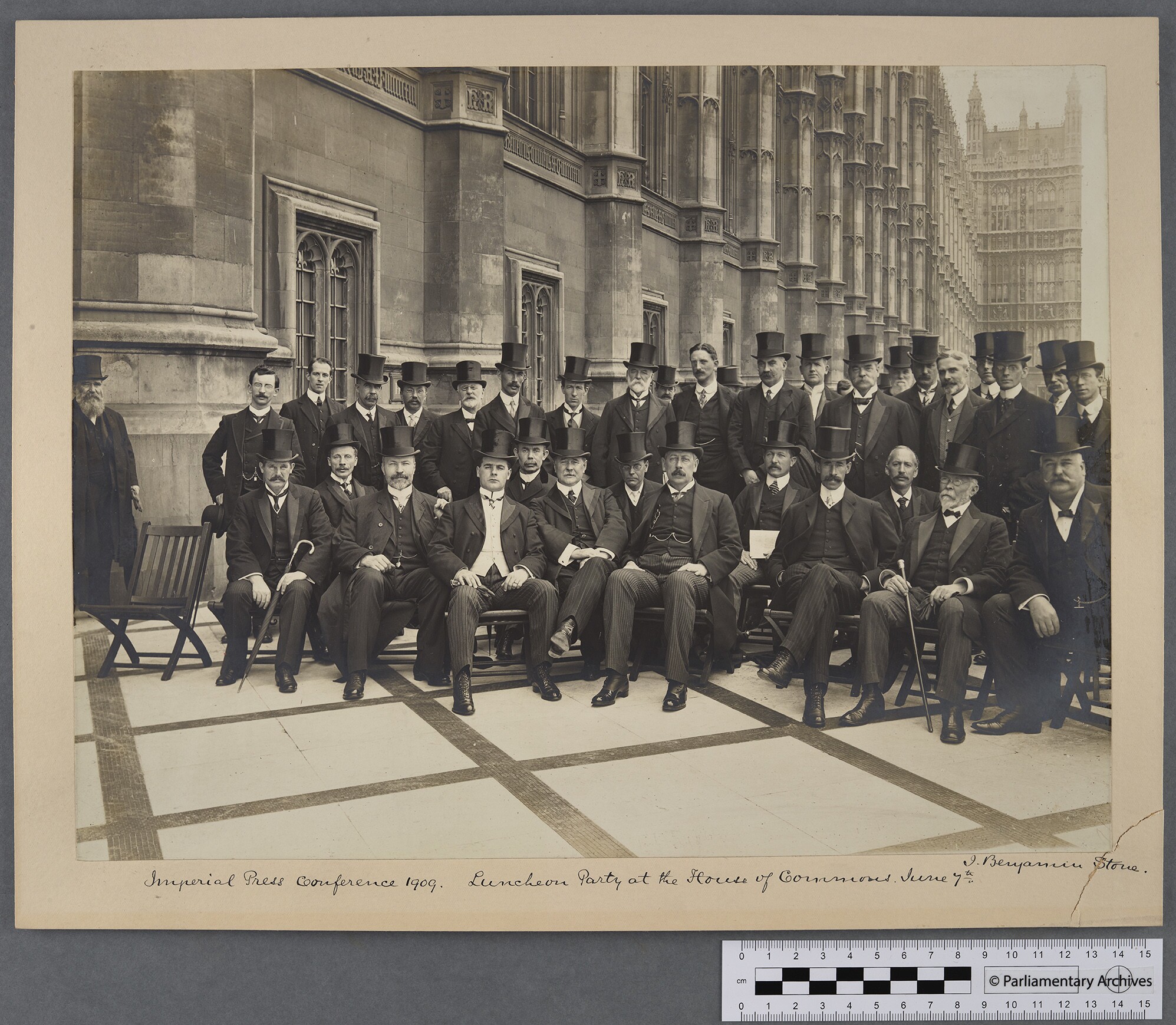 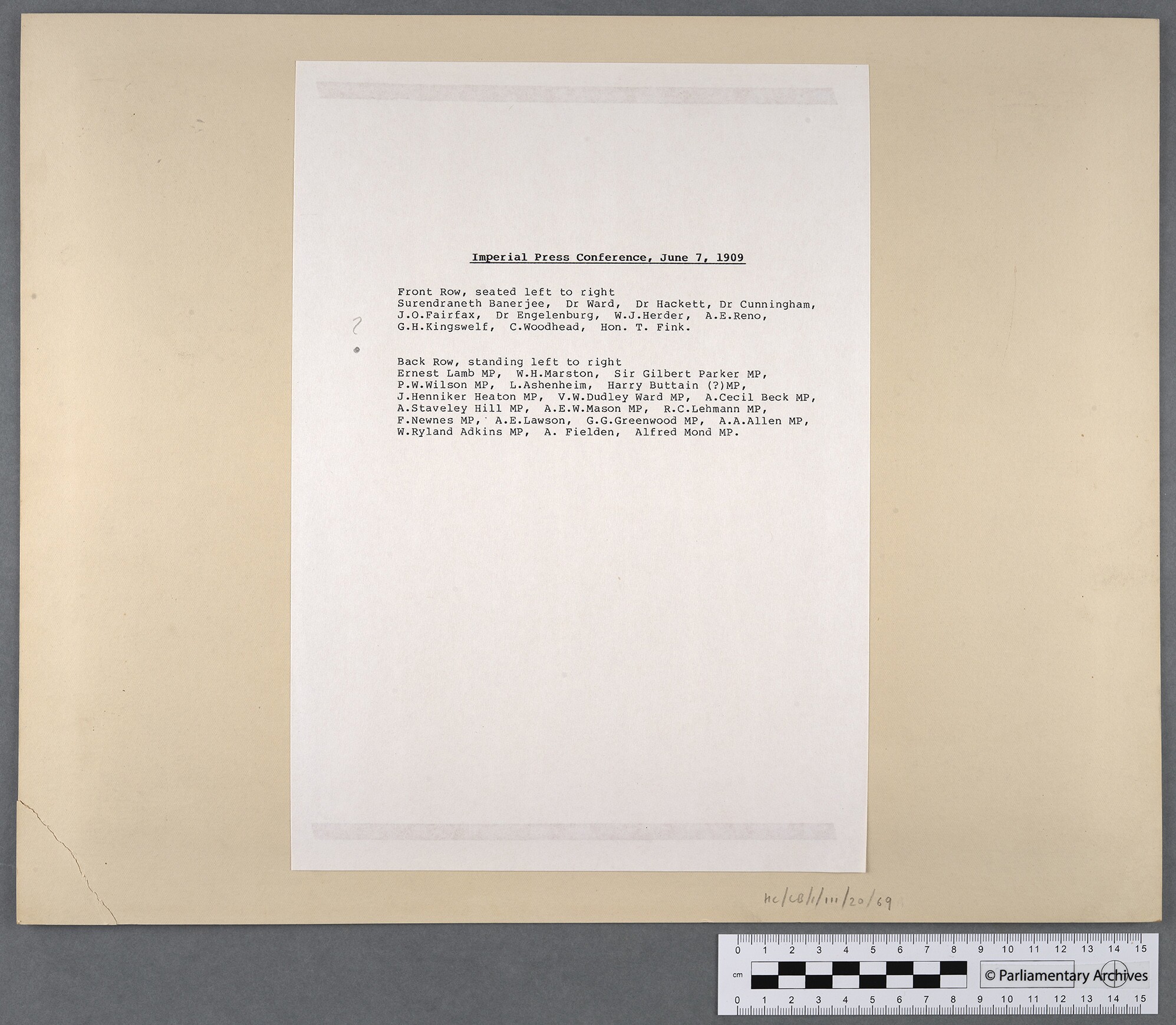